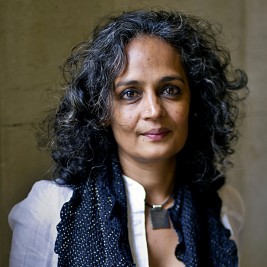 Businesses, Non-profit organizations, event planners and companies across the country have worked closely with our booking agents to hire Arundhati Roy for a speaking engagements, guest appearances, product endorsements and corporate events. Many of those same clients have continued to turn to our speakers bureau as we can easily align Arundhati Roy’s availability with their upcoming seminar, gala, annual conference, corporate function, and grand opening. Our close relationship with Arundhati Roy’s booking agent and management team further enables us to provide inquiring clients with Arundhati Roy’s speaking fee and appearance cost.

If your goal is to hire Arundhati Roy to be your next keynote speaker or to be the next brand ambassador our celebrity speakers bureau can assist. If Arundhati Roy’s booking fee is outside your companies budget or your unable to align with his appearance availability, our booking agents can provide you a list of talent that aligns with your event theme, budget and event date.

Arundhati Roy is an Indian author best known for her novel The God of Small Things (1997), which won the Man Booker Prize for Fiction in 1997 and became the biggest-selling book by a non-expatriate Indian author. She is also a political activist involved in human rights and environmental causes.

Roy began writing her first novel, The God of Small Things, in 1992, completing it in 1996. The book is semi-autobiographical and a major part captures her childhood experiences in Aymanam.

The publication of The God of Small Things catapulted Roy to international fame. It received the 1997 Booker Prize for Fiction and was listed as one of the New York Times Notable Books of the Year for 1997. It reached fourth position on the New York Times Bestsellers list for Independent Fiction. From the beginning, the book was also a commercial success: Roy received half a million pounds as an advance. It was published in May, and the book had been sold in eighteen countries by the end of June.

The God of Small Things received stellar reviews in major American newspapers such as The New York Times (a "dazzling first novel," "extraordinary", "at once so morally strenuous and so imaginatively supple") and the Los Angeles Times ("a novel of poignancy and considerable sweep"), and in Canadian publications such as the Toronto Star ("a lush, magical novel"). By the end of the year, it had become one of the five best books of 1997 by Time. Critical response in the United Kingdom was less positive, and the awarding of the Booker Prize caused controversy; Carmen Callil, a 1996 Booker Prize judge, called the novel "execrable", and The Guardian called the context "profoundly depressing". In India, the book was criticised especially for its unrestrained description of sexuality by E. K. Nayanar, then Chief Minister of Roy's home state Kerala, where she had to answer charges of obscenity.