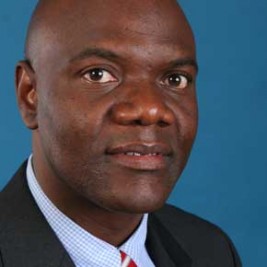 If your goal is to hire Arthur Mutambara to be your next keynote speaker or to be the next brand ambassador our celebrity speakers bureau can assist. If Arthur Mutambara’s booking fee is outside your companies budget or your unable to align with his appearance availability, our booking agents can provide you a list of talent that aligns with your event theme, budget and event date.

Arthur Mutambara is a former student leader who is now recognized as one of Africa's most prominent scientists.

Fifteen years ago, at the University of Zimbabwe, he led the student opposition to the ruling Zanu PF.

According to records at the university, he was a brilliant engineering student, who won every scholarship he applied for.

After completing his doctorate at Britain's Oxford University he went on to the Massachusetts Institute of Technology and became professor at several other universities in the United States. Unlike many African academics, Mutambara was always determined to return to Africa.

Over the weekend he arrived back in Zimbabwe from Johannesburg where he heads up an African scientific institution for talks with leaders of one faction of the MDC. Some in this faction want him to make himself available as a candidate for the top job, as president.

Late Monday he confirmed his re-entry into Zimbabwe politics, and said he hoped the enthusiasm of a new leadership which he said was untainted by current disagreements, would make unification of the two factions of the MDC possible.

According to the MDC's constitution any one of the 12 provinces would have to nominate him and authorised delegates to the party's congress next Sunday will vote for a new president.

Should he get the necessary nomination, and win the vote, analysts say his political past, intellectual prowess and reputation as a leader, would do much to revive Zimbabwe's stalled opposition politics and could lead to the two factions re-uniting.

The faction of the MDC lead by party president Morgan Tsvangirai declined to comment on Mutambara's sudden re-entry into Zimbabwe's opposition political scenario.

Tsvangirai's faction is holding its congress next month, but he is certain to be the only candidate for the top job.

The MDC split last October over adherence to the party's constitution.

Tsvangirai said that even though a narrow majority of party executives voted to participate in the first ever elections for a senate last November, the MDC should not take part.

Most of the MDC's top leaders rebelled against him, saying he had defied the party's constitution.

The party split into two factions with both declaring themselves to be authentic.