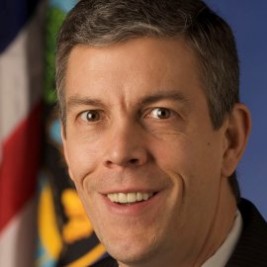 Businesses, Non-profit organizations, event planners and companies across the country have worked closely with our booking agents to hire Arne Duncan for a speaking engagements, guest appearances, product endorsements and corporate events. Many of those same clients have continued to turn to our speakers bureau as we can easily align Arne Duncan’s availability with their upcoming seminar, gala, annual conference, corporate function, and grand opening. Our close relationship with Arne Duncan’s booking agent and management team further enables us to provide inquiring clients with Arne Duncan’s speaking fee and appearance cost.

If your goal is to hire Arne Duncan to be your next keynote speaker or to be the next brand ambassador our celebrity speakers bureau can assist. If Arne Duncan’s booking fee is outside your companies budget or your unable to align with his appearance availability, our booking agents can provide you a list of talent that aligns with your event theme, budget and event date.

Arne Duncan is the ninth U.S. secretary of education. Duncan served under President Barack Obama from January 20, 2009 through January 1, 2016.

Duncan’s tenure as secretary has been marked by a number of significant accomplishments on behalf of American students and teachers. He helped to secure congressional support for President Obama’s investments in education, including the American Recovery and Reinvestment Act’s $100 billion to fund 325,000 teaching jobs, increases in Pell grants, reform efforts such as Race to the Top and Investing in Innovation, and interventions in low-performing schools. Additionally, he has helped secure an additional $10 billion to avoid teacher layoffs; the elimination of student loan subsidies to banks; and a $500 million national competition for early learning programs. Under Duncan’s leadership at the Department, the Race to the Top program has the incentives, guidance, and flexibility it needs to support reforms in states. The Department also has focused billions of dollars to transform struggling schools, prompting nearly 1,000 low-performing schools nationwide to recruit new staff, adopt new teaching methods, and add learning time.

In support of President Obama’s goal for the United States to produce the highest percentage of college graduates by the year 2020, Duncan has helped secure increases in the Pell grant program to boost the number of young Americans attending college and receiving postsecondary degrees. He has begun new efforts to ensure that colleges and universities provide more transparency around graduation, job placement, and student loan default rates. With the income-based repayment program introduced during Duncan’s tenure, student loan payments are being reduced for college graduates in low-paying jobs, and loans will be forgiven after 10 years for persons in certain public service occupations, such as teachers, police officers and firefighters.

Before becoming secretary of education, Duncan served as the chief executive officer of the Chicago Public Schools (CPS), a position he held from June 2001 through December 2008. In that time, he won praise for uniting education reformers, teachers, principals and business stakeholders behind an aggressive education reform agenda that included opening more than 100 new schools, expanding after-school and summer learning programs, closing down underperforming schools, increasing early childhood and college access, dramatically boosting the caliber of teachers, and building public-private partnerships around a variety of education initiatives. Duncan is credited with significantly raising student performance on national and state tests, increasing graduation rates and the numbers of students taking Advanced Placement courses, and boosting the total number of scholarships secured by CPS students to more than $150 million.

Prior to joining the Chicago Public Schools, from 1992 to 1998, Duncan ran the nonprofit education foundation Ariel Education Initiative, which helped fund a college education for a class of inner-city children under the I Have A Dream program. He was part of a team that later started a new public elementary school built around a financial literacy curriculum, the Ariel Community Academy, which today ranks among the top elementary schools in Chicago. From 1987 to 1991, Duncan played professional basketball in Australia, where he also worked with children who were wards of the state.

Duncan is married to Karen Duncan, and they have two children.