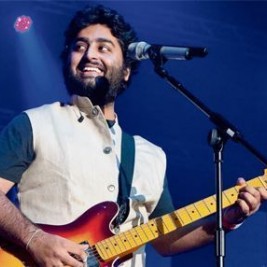 Businesses, Non-profit organizations, event planners and companies across the country have worked closely with our booking agents to hire Arijit Singh for a speaking engagements, guest appearances, product endorsements and corporate events. Many of those same clients have continued to turn to our speakers bureau as we can easily align Arijit Singh’s availability with their upcoming seminar, gala, annual conference, corporate function, and grand opening. Our close relationship with Arijit Singh’s booking agent and management team further enables us to provide inquiring clients with Arijit Singh’s speaking fee and appearance cost.

If your goal is to hire Arijit Singh to be your next keynote speaker or to be the next brand ambassador our celebrity speakers bureau can assist. If Arijit Singh’s booking fee is outside your companies budget or your unable to align with his appearance availability, our booking agents can provide you a list of talent that aligns with your event theme, budget and event date.

Arijit Singh (born 25 April 1987)is an Indian playback singer.Arijit is cited as one of the most talented singers in India and his songs are considered as iconic in India. He predominantly sings Hindi and Bengali songs. He is regarded as one of the most successful playback singers in Hindi Music Industry, and is often called a Singer whom every man loves". Arijit's voice is classified as Soothing,Soulful, and Melodious.

Arijit is a versatile playback singer and has been referred to as the "King of Playback singing". He is praised for his ability of giving soul to lyrics, and "life to a song" He is known for being shy and emotional and often stays away from limelight despite huge fame and popularity that he enjoys in India. Although the number of musical superhits sung by Arijit are countless but his most loved songs in Hindi songs are "Tum Hi Ho", "Sanam Re", "Muskurane Ki Wajah Tum Ho", "Hamari Adhuri Kahani", "Hamdard", "Man Mast Magan", "Kabira (Encore)", "Kabhi Jo Badal Barse", "Samjhawan", "Sawan Aaya Hai", "Suno Na Sangemarmar", "Khamoshiyan". Arijit Insists the Presence of lyricists in Recording Sessions, according to him only a poet can understand relevance of his words and feelings behind it. Arijit said his favourite lyricists are Irshad Kamil, Sayeed Quadri and most favourite Amitabh Bhattacharya, Arijit said he shares uncanny relationship with the lyricist Amitabh bhattacharya, he can read the lines of his lyrics,that's the place were emotions are secreted. While Interacting with Subhash Ghai at Question and answers session in Whistling Woods International Campus on Arts and technique of singing at the 5th Veda Cultural Hub, Arijit said Singing is like talking. It is an art of expression. There are other factors too but they all follow on once you understand your lyrics and rhythm well. There are no rules. You just have to practice well Arijit further on stage shared his childhood memories and said, “I mostly practiced modern Bengali and Indian classical music. My Guru Rajendra Prasad Hazari inspired me to practice more of modern singing as according to him Indian classical was dying. Singer and Renowned Music Composer Shankar Mahadevan said i know him before he becamed Arijit Singh,He is an Educated Musician,he understands his Sargam, he has got depth.