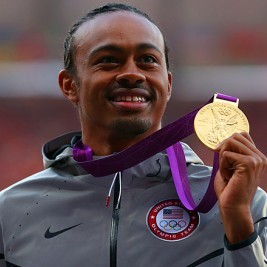 Businesses, Non-profit organizations, event planners and companies across the country have worked closely with our booking agents to hire Aries Merritt for a speaking engagements, guest appearances, product endorsements and corporate events. Many of those same clients have continued to turn to our speakers bureau as we can easily align Aries Merritt’s availability with their upcoming seminar, gala, annual conference, corporate function, and grand opening. Our close relationship with Aries Merritt’s booking agent and management team further enables us to provide inquiring clients with Aries Merritt’s speaking fee and appearance cost.

If your goal is to hire Aries Merritt to be your next keynote speaker or to be the next brand ambassador our celebrity speakers bureau can assist. If Aries Merritt’s booking fee is outside your companies budget or your unable to align with his appearance availability, our booking agents can provide you a list of talent that aligns with your event theme, budget and event date.

Gold medal hurdler, Aries Merritt was born July 24, 1985 and is an American track and field athlete who specialises in the 110 metre hurdles. At the 2012 Summer Olympics in London, he won the gold medal in the 110 meter hurdles. Born in Chicago, he moved to Marietta, Georgia, attending Joseph Wheeler High School, where he was teammates with Reggie Witherspoon. Merritt subsequently had a successful college athletic career. In 2006, he won the NCCA Championships, was undefeated in all hurdles events that year, and broke Willie Gault's University of Tennessee hurdles record. His victory at the NCCA Championships in 13.21 was the second fastest ever collegiate time in the United States, behind only Renaldo Nehemiah. He took the 110 meter hurdles gold at the 2004 World Junior Championships and finished sixth at the 2006 World Athletics Final. He reached the World Athletics Final in 2008, finishing in fourth. In Istanbul, Merritt became the indoor world champion in the 60 meters hurdles. He beat Liu Xiang and Pascal Martinot-Lagarde with a time of 7.44 s. At the Olympic trials in Oregon, Merritt won the 110m hurdles final in a world leading time of 12.93 s. Merritt subsequently matched the time at two consecutive Diamond League events, at Crystal Palace and Monaco, winning both races. He entered the 2012 Olympic Games in London being considered a major threat to the established two-man dominance of Liu Xiang and Dayron Robles. On August 8, 2012 Merritt won the gold medal.