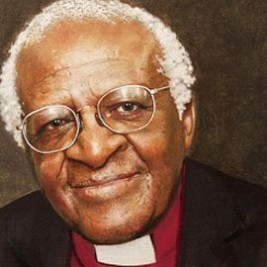 If your goal is to hire Archbishop Desmond Tutu to be your next keynote speaker or to be the next brand ambassador our celebrity speakers bureau can assist. If Archbishop Desmond Tutu’s booking fee is outside your companies budget or your unable to align with his appearance availability, our booking agents can provide you a list of talent that aligns with your event theme, budget and event date.

Archbishop Desmond Tutu is a world-renowned human rights activist and Nobel Peace Prize recipient. Beginning with his opposition to apartheid in South Africa, he has worked tirelessly to spread peace, justice, and democracy and to end racial divisions throughout the world.

His faith in and commitment to the peaceful destiny of South Africa earned Archbishop Tutu the 1984 Nobel Peace Prize. He served for years as his country's voice of conscience during its long struggle against apartheid. When that battle was finally won, Archbishop Tutu took the lead in ministering to the nation's wounds. His findings as part of the Truth and Reconciliation Commission marked a significant step in South Africa's healing process, as well as an international reminder of the commitment to the pursuit of freedom and justice. He is also chairman of The Elders, a nonpartisan group of influential global statesmen, which speaks out against ongoing injustice and works for positive change.

Archbishop Tutu's unshakable faith that humanity was created for good in God's image is chronicled in his book Made for Goodness, co-written with daughter Mpho. Highlighting his ministry and activism experiences, the book imparts a message of realizing the goodness in ourselves and others in pursuing a fulfilled life.

In 2009, President Obama awarded Archbishop Tutu the Presidential Medal of Freedom - the highest civilian honor - for his significant contributions to the nation and the world. In 2013, he was awarded the Templeton Prize for his lifelong work in advancing spiritual principles. The Archbishop's great friend Nelson Mandela perfectly sums up his legacy: "Sometimes strident, often tender, never afraid, and seldom without humor."