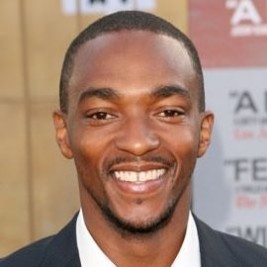 Businesses, Non-profit organizations, event planners and companies across the country have worked closely with our booking agents to hire Anthony Mackie for a speaking engagements, guest appearances, product endorsements and corporate events. Many of those same clients have continued to turn to our speakers bureau as we can easily align Anthony Mackie’s availability with their upcoming seminar, gala, annual conference, corporate function, and grand opening. Our close relationship with Anthony Mackie’s booking agent and management team further enables us to provide inquiring clients with Anthony Mackie’s speaking fee and appearance cost.

If your goal is to hire Anthony Mackie to be your next keynote speaker or to be the next brand ambassador our celebrity speakers bureau can assist. If Anthony Mackie’s booking fee is outside your companies budget or your unable to align with his appearance availability, our booking agents can provide you a list of talent that aligns with your event theme, budget and event date.

Anthony Mackie is an American actor. He has been featured in feature films, television series, and Broadway and Off-Broadway plays, including Ma Rainey's "Black Bottom," "Drowning Crow," "McReele," "A Soldier's Play" and Carl Hancock Rux's "Talk," for which he won an Obie Award in 2002.

Mackie would later go on to star as a man who struggles to adjust to the world he's created after becoming a corporate whistleblower and later starting a business impregnating lesbians for a fee in Spike Lee's 2004 film "She Hate Me."

Mackie portrayed the rapper Tupac Shakur in the 2009 film "Notorious." He first played Shakur on Off-Off Broadway (while still at Juilliard) in 2001 in the play "Up Against the Wind," which also featured his classmate Thoms. Other films in the works include biopics of Olympian Jesse Owens, Antebellum slave revolt leader Nat Turner, and cornetist and jazz musician Buddy Bolden.

He appeared in the 2011 Matt Damon film "The Adjustment Bureau," where he plays Harry Mitchell, a sympathetic member of a shadowy supernatural group that controls human destiny. In July 2012, Mackie entered talks to star as the Falcon in the Marvel Studios sequel "Captain America: The Winter Soldier." His casting was later confirmed by co-star Chris Evans. Most recently, Mackie was cast in Marvel's new film, "Ant-Man," as well as "Captain America: Civil War."