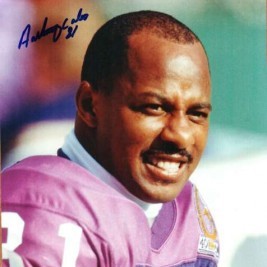 Businesses, Non-profit organizations, event planners and companies across the country have worked closely with our booking agents to hire Anthony Carter for a speaking engagements, guest appearances, product endorsements and corporate events. Many of those same clients have continued to turn to our speakers bureau as we can easily align Anthony Carter’s availability with their upcoming seminar, gala, annual conference, corporate function, and grand opening. Our close relationship with Anthony Carter’s booking agent and management team further enables us to provide inquiring clients with Anthony Carter’s speaking fee and appearance cost.

If your goal is to hire Anthony Carter to be your next keynote speaker or to be the next brand ambassador our celebrity speakers bureau can assist. If Anthony Carter’s booking fee is outside your companies budget or your unable to align with his appearance availability, our booking agents can provide you a list of talent that aligns with your event theme, budget and event date.

Anthony Carter was born September 17, 1960 in Riviera Beach, Florida and is a former wide receiver. He finished his college career as the University of Michigan's all-time leading receiver, and played professionally for thirteen years in the United States Football League and the National Football League. He was also known as 'AC'.

Upon graduating from college, Anthony Carter chose to play in the upstart USFL, rather than in the NFL. The league employed a territorial draft, aimed at sending players to teams whose fans were already familiar with them. Because of this unique system, the Michigan Panthers were allowed to select Carter prior to the league's traditional draft.

1983 was Carter's first season with the Panthers and one of his most successful as a professional. Although the team started 1-4, they finished the regular season 12-6 and went on to defeat the Philadelphia Stars to win the first USFL championship. With his team behind late in the fourth quarter, he scored the game-winning touchdown on a 48 yard pass from Bobby Hebert. He finished the game with nine receptions for 179 yards. For the season, he gained 1,081 yards on 60 catches, nine of them touchdowns.

Carter's 1984 season was cut short after only six games when his arm was broken in a game against the San Antonio Gunslingers. Before the 1985 season the Panthers merged with the Oakland Invaders. In his last USFL season, he led his team in receiving yards (1,323), receptions (70), and receiving touchdowns (14).

When the USFL folded after the 1985 season, Carter signed with the NFL's Miami Dolphins, who drafted Carter back in 1983 in order to secure his NFL rights. However, he was traded to the Minnesota Vikings before playing a game with the team. He led the Vikings in receptions five of his first six seasons with the team, and was selected to the Pro Bowl in 1987 and 1988. In the 1987 season, Carter helped his team reach the NFC championship game by recording 10 receptions for an NFL playoff record 227 yards, along with 1 carry for 30 yards in the Vikings 36-24 upset win over the 13-2 San Francisco 49ers in the divisional playoff round. The following season, he caught 4 passes for 102 yards in a 28-17 divisional round win over the Los Angeles Rams. Although Cris Carter became the team's number one receiver in 1991, Anthony Carter remained an effective offensive weapon through 1993, his final season with the team.

The final two years of Carter's pro career were spent in the same state where it began, this time with the Detroit Lions. Most of his time with the Lions was spent attempting to come back from injury. He played in only four games in 1994, and failed to catch a pass in 1995.