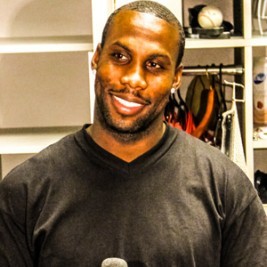 Businesses, Non-profit organizations, event planners and companies across the country have worked closely with our booking agents to hire Anquan Boldin for a speaking engagements, guest appearances, product endorsements and corporate events. Many of those same clients have continued to turn to our speakers bureau as we can easily align Anquan Boldin’s availability with their upcoming seminar, gala, annual conference, corporate function, and grand opening. Our close relationship with Anquan Boldin’s booking agent and management team further enables us to provide inquiring clients with Anquan Boldin’s speaking fee and appearance cost.

If your goal is to hire Anquan Boldin to be your next keynote speaker or to be the next brand ambassador our celebrity speakers bureau can assist. If Anquan Boldin’s booking fee is outside your companies budget or your unable to align with his appearance availability, our booking agents can provide you a list of talent that aligns with your event theme, budget and event date.

Anquan Boldin was born October 3, 1980 in Pahokee, Florida. He was chosen by the Arizona Cardinals in the 2003 NFL Draft out of Florida State University. He was drafted in the 2nd round because of his relatively slow combine speed. His speed has proved no impediment to success. Boldin was named NFL Offensive Rookie of the Year in 2003 by the Associated Press. He is known as one of the league's most physical receivers. Boldin is the cousin of CFL All-Star defensive back Korey Banks. He also has a brother, Demir Boldin, who currently plays for Wake Forest University. He has one son, Anquan Jr . Boldin teams with Larry Fitzgerald, who was drafted a year after Boldin in 2004, to create one of the best wide receiver tandems in the NFL. In 2005, Boldin was injured and missed part of the season but yet still caught more than 100 passes for over 1,400 yards. On top of that, the Cardinals wide receivers became only the third duo from the same team to each catch over 100 receptions (see Herman Moore and Brett Perriman, also Rod Smith and Ed McCaffrey). Boldin and Fitzgerald also topped the 1,400-yard mark, only the third duo to achieve that in NFL history. They joined Detroit's Herman Moore and Brett Perriman, who accomplished the feat in 1995, and St. Louis' Torry Holt and Isaac Bruce, who did it in 2000. In 2007, Boldin became the quickest player in NFL history to compile 400 receptions and was selected to play in the 2007 Pro Bowl for the NFC, along with teammate Adrian Wilson.