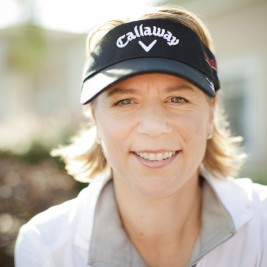 If your goal is to hire Annika Sorenstam to be your next keynote speaker or to be the next brand ambassador our celebrity speakers bureau can assist. If Annika Sorenstam’s booking fee is outside your companies budget or your unable to align with his appearance availability, our booking agents can provide you a list of talent that aligns with your event theme, budget and event date.

Annika Sörenstam was born 9 October 1970 and is a Swedish professional golfer whose achievements rank her as one of the most successful female golfers in history. Before stepping away from competitive golf at the end of the 2008 season, she won 90 international tournaments as a professional, making her the female golfer with the most wins to her name. She has won 72 official LPGA tournaments including ten majors and 18 other tournaments internationally, and she tops the LPGA's career money list with earnings of over $22 million—over $8 million ahead of her nearest rival. Since 2006, Sörenstam has held dual American and Swedish citizenship. The winner of a record eight Player of the Year awards, and six Vare Trophies given to the LPGA player with the lowest seasonal scoring average, she is the only female golfer to have shot a 59 in competition. She holds various all-time scoring records including the lowest season scoring average: 68.6969 in 2004. Representing Europe in the Solheim Cup on eight occasions between 1994–2007, Sörenstam was the event's all-time leading points earner until her record was surpassed by England's Laura Davies during the 2011 Solheim Cup. Sörenstam made history at the Bank of America Colonial tournament in 2003 as the first woman to play in a PGA Tour event since 1945. Her growing off-course interests include the ANNIKA golf academy, golf course design, ANNIKA-branded products, and a charitable foundation.