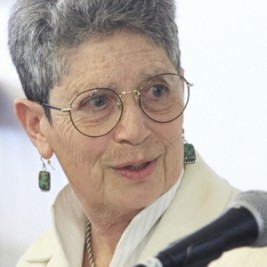 If your goal is to hire Anne Fausto-Sterling to be your next keynote speaker or to be the next brand ambassador our celebrity speakers bureau can assist. If Anne Fausto-Sterling’s booking fee is outside your companies budget or your unable to align with his appearance availability, our booking agents can provide you a list of talent that aligns with your event theme, budget and event date.

Fausto-Sterling received her Bachelor of Arts degree in zoology from University of Wisconsin in 1965 and her Ph.D. in developmental genetics from Brown University in 1970. She has taught at Brown since earning her Ph.D. and is the Nancy Duke Lewis Professor of Biology and Gender Studies in the Department of Molecular and Cell Biology and Biochemistry there. She has written two books intended for the general audience. The second edition of the first of those books, Myths of Gender, was published in 1992.

Her second book for the general public is Sexing the Body: Gender Politics and the Construction of Sexuality, published in 2000. She stated that in it she sets out to "convince readers of the need for theories that allow for a good deal of human variation and that integrate the analytical powers of the biological and the social into the systematic analysis of human development."

In a paper entitled The Five Sexes, in which, according to her, "I had intended to be provocative, but I had also written with tongue firmly in cheek." Fausto-Sterling laid out a thought experiment considering an alternative model of gender containing five sexes: male, female, merm, ferm, and herm. This thought experiment was interpreted by some as a serious proposal or even a theory; advocates for intersex people stated that this theory was wrong, confusing and unhelpful to the interests of intersex people. In a later paper (The Five Sexes, Revisited), she has acknowledged these objections.

Fausto-Sterling is married to Paula Vogel, a Yale professor and Pulitzer-winning playwright. Fausto-Sterling's mother, Dorothy Sterling, was a noted writer and historian while her father was also a published writer.