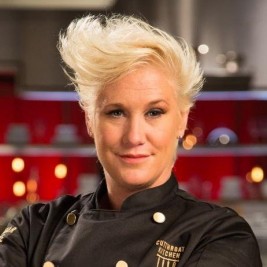 Businesses, Non-profit organizations, event planners and companies across the country have worked closely with our booking agents to hire Anne Burrell for a speaking engagements, guest appearances, product endorsements and corporate events. Many of those same clients have continued to turn to our speakers bureau as we can easily align Anne Burrell’s availability with their upcoming seminar, gala, annual conference, corporate function, and grand opening. Our close relationship with Anne Burrell’s booking agent and management team further enables us to provide inquiring clients with Anne Burrell’s speaking fee and appearance cost.

If your goal is to hire Anne Burrell to be your next keynote speaker or to be the next brand ambassador our celebrity speakers bureau can assist. If Anne Burrell’s booking fee is outside your companies budget or your unable to align with his appearance availability, our booking agents can provide you a list of talent that aligns with your event theme, budget and event date.

Anne Burrell was born September 21, 1969 and is an American chef, TV personality, and was an instructor at the Institute of Culinary Education in New York City until 2007. She is the host of the Food Network show Secrets Of a Restaurant Chef and co-host of Worst Cooks in America, where she is currently undefeated. She is also one of Iron Chef Mario Batali's sous chefs in the Iron Chef America series and appears on other programs on the network such as The Best Thing I Ever Ate. She was a contestant on the fourth season of The Food Network competition show, The Next Iron Chef Super Chefs being eliminated in episode 6. She was also a contestant on the first season of Chopped All-Stars Tournament, winning the "Food Network Personalities" preliminary round to advance to the final round, where she placed second runner up to Nate Appleman (winner) and Aaron Sanchez.

In 2005, Iron Chef Mario Batali asked Burrell to serve as one of his sous chefs, along with Chef and Restaurateur Mark Ladner, for a pilot taping of Food Network's the Iron Chef America series. She has continued to serve as his sous chef.

The second season premiered on January 2, 2011, with Chef MacMillan being replaced by Chef Robert Irvine. To raise the stakes, Irvine and Burrell made a side bet, where Burrell risked losing signature hair and Irvine risked going platinum. Chef Burell won both the competition and the side-bet, when her recruit, Joshie Berger, edged out Irvine's recruit, Georg Coleman.

Also in 2011, Burrell became the fourth runner up in the culinary competition, The Next Iron Chef on the Food Network, being eliminated in week six of the competition.