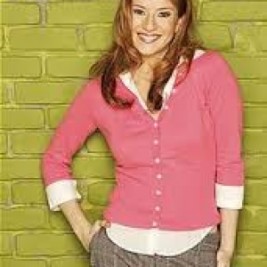 If your goal is to hire Annaliese van der Pol to be your next keynote speaker or to be the next brand ambassador our celebrity speakers bureau can assist. If Annaliese van der Pol’s booking fee is outside your companies budget or your unable to align with his appearance availability, our booking agents can provide you a list of talent that aligns with your event theme, budget and event date.

Anneliese van der Pol was born on September 23, 1984 in Naaldwijk, Netherlands, to Dyan Ross and Willem van der Pol. She moved to the United States when she was a young child. Her American-born mother named her after Holocaust victim Anne Frank. A graduate of the Musical Theater Program at The Orange County High School of the Arts, California, Anneliese (pronounced AH-na-LEE-zah) has already made an impressive mark in the world of entertainment. For her captivating performance as Eva Péron in the Buena Park Civic Theater production of Evita (1996), she not only won rave reviews from the Los Angeles Times but also earned a place in history as the the youngest actress - at the age of 15 - to play the role in a professional production. More recently, Anneliese starred as Laurey in Oklahoma! (1955) for Austin Musical Theater, and received both an Austin Critics Table Award nomination for "Best Actress In a Musical" and a B. Iden Payne Award nomination for "Best Featured Actress in a Musical." In 2009, Van der Pol returned to theatre in Theatre Under the Star's Musical Production of Meet Me in St. Louis (1944) as Esther Smith, in Houston.