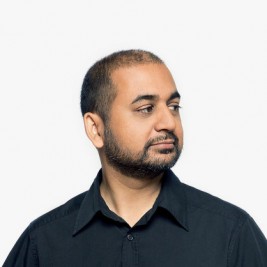 Businesses, Non-profit organizations, event planners and companies across the country have worked closely with our booking agents to hire Anil Dash for a speaking engagements, guest appearances, product endorsements and corporate events. Many of those same clients have continued to turn to our speakers bureau as we can easily align Anil Dash’s availability with their upcoming seminar, gala, annual conference, corporate function, and grand opening. Our close relationship with Anil Dash’s booking agent and management team further enables us to provide inquiring clients with Anil Dash’s speaking fee and appearance cost.

If your goal is to hire Anil Dash to be your next keynote speaker or to be the next brand ambassador our celebrity speakers bureau can assist. If Anil Dash’s booking fee is outside your companies budget or your unable to align with his appearance availability, our booking agents can provide you a list of talent that aligns with your event theme, budget and event date.

Anil Dash is an entrepreneur, activist and writer recognized as one of the most prominent voices advocating for a more humane, inclusive and ethical technology industry. He is the CEO of Fog Creek Software, a privately-held New York City company that’s one of the most influential and respected independent software companies. Fog Creek incubated landmark startups like Trello and Stack Overflow, and is now focused on Gomix, the new platform that lets anyone make the app of their dreams in minutes. Dash serves as a board member for a range of thoughtful companies and non-profits: Stack Overflow, the world’s largest community for computer programmers; Data & Society Research Institute, the pioneering research organization examining the impact of tech on society and culture; NY Tech Alliance, America’s largest tech trade organization; and the Lower East Side Girls Club, which serves girls and families in need in New York City. He was an advisor to the Obama White House’s Office of Digital Strategy, and today advises major startups and non-profits including Medium and DonorsChoose. Described as a “blogging pioneer” by the New Yorker, Dash has a unique presence on social media, where he’s been blogging continuously since 1999 with definitive analyses of both the technology industry and its impact on culture, earning recognition as a Webby honoree with one of the only personal blogs to have been cited in sources ranging from the New York Times to the BBC to TMZ, as well as hundreds of academic citations. In 2013, Time named @anildash one of the best accounts on Twitter, and it is the only account ever retweeted by both Bill Gates and Prince, a succinct summarization of Dash’s interests. As a writer and artist, Dash has been a contributing editor and monthly columnist for Wired, has had his works exhibited in the New Museum of Contemporary Art, and DJed the XOXO arts festival. Prior to joining Fog Creek, Dash cofounded Makerbase, an online community for people who make apps and websites, and Activate, the boutique management consultancy which defines strategies for the most important companies in media and technology. Earlier in his career, Dash founded the non-profit Expert Labs, a research initiative backed by the MacArthur Foundation and the American Association for the Advancement of Science (AAAS) which collaborated with the Obama administration on direct public engagement in policy making. He also helped start Six Apart, the seminal social media company that invented the publishing technology behind many of the earliest and most influential blogs on the Internet. Dash is based in New York City, where he lives with his wife Alaina Browne and their son Malcolm. Dash has never played a round of golf, drank a cup of coffee, or graduated from college.