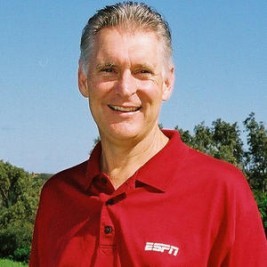 Businesses, Non-profit organizations, event planners and companies across the country have worked closely with our booking agents to hire Andy North for a speaking engagements, guest appearances, product endorsements and corporate events. Many of those same clients have continued to turn to our speakers bureau as we can easily align Andy North’s availability with their upcoming seminar, gala, annual conference, corporate function, and grand opening. Our close relationship with Andy North’s booking agent and management team further enables us to provide inquiring clients with Andy North’s speaking fee and appearance cost.

If your goal is to hire Andy North to be your next keynote speaker or to be the next brand ambassador our celebrity speakers bureau can assist. If Andy North’s booking fee is outside your companies budget or your unable to align with his appearance availability, our booking agents can provide you a list of talent that aligns with your event theme, budget and event date.

Pro golfer, Andy North, was born March 9, 1950 in Thorp, Wisconsin. North attended the University of Florida in Gainesville, Florida, where he was a 3-time All American. He turned professional in 1972. North had a moderately successful career on the PGA Tour made remarkable by the fact that two of his three wins on the Tour came on the biggest stage in men's professional golf, the U.S. Open.

The first PGA Tour win of North's career came at the 1977 American Express Westchester Classic. He was 28 years old when he won the 1978 U.S. Open at Cherry Hills Country Club in Cherry Hills Village, Colorado. He moved into the lead after the second round, and was three shots ahead going into Sunday, but an erratic final round left him needing to make a five on the last hole to take the championship. He struggled up the eighteenth, finding the rough twice and then landing in a greenside bunker, but he nailed a four foot putt to win by one stroke over J. C. Snead and Dave Stockton.

At the 1985 U.S. Open, North found himself two shots behind Taiwan's Tze-Chung Chen going into the final round, but three shots clear of the rest of the field. Chen moved into a four shot lead early on, but threw the tournament wide open by shooting a "double-par" eight on the fifth hole. The lead swung between North, Chen and Dave Barr, who had surged into contention, but North went into the last hole with a two shot lead, and his bogey five was enough to give him a second major championship.

North played on the 1985 Ryder Cup team. In 1990, he won the PGA Grand Slam of Golf. Since turning fifty in 2000 North has played intermittently on the Champions Tour. His best finish at this level is second in the 2001 Emerald Coast Classic. The improbability of North's career is illustrated by the fact that the only other post World War II golfer to win two U.S. Opens without reaching double figures in individual professional titles is Lee Janzen, and he accumulated eight to North's three.