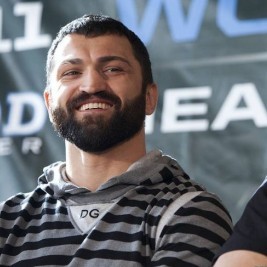 If your goal is to hire Andrei Arlovski to be your next keynote speaker or to be the next brand ambassador our celebrity speakers bureau can assist. If Andrei Arlovski’s booking fee is outside your companies budget or your unable to align with his appearance availability, our booking agents can provide you a list of talent that aligns with your event theme, budget and event date.

Andrei Arlovski was born February 4, 1979 and is a Belarusian mixed martial arts fighter and a former Ultimate Fighting Championship heavyweight champion. He is considered to be one of the top ten ranked heavyweights in the world by multiple MMA publications.

At the age of 20, Arlovski began his professional MMA career at the Mix Fight M-1 in St Petersburg, Russia on April 9, 1999. It was a fairly inauspicious start, losing by KO to Viacheslav Datsik. Not deterred, Arlovski returned in 2000 to M-1 Global at the European Championships, taking the heavyweight crown with a submission victory and a KO victory.

After leaving the UFC, Arlovski signed with the newly created MMA-promotion Affliction, and participated in their inaugural event "Affliction: Banned" on July 19, 2008. He fought and defeated top ranked heavyweight fighter and former IFL heavyweight stand-out Ben Rothwell by KO in the final round of the fight, ending Rothwell's 13 fight win streak and giving him his first defeat in over 3 years.

Originally scheduled to face former UFC Heavyweight Champion and top-ranked heavyweight Josh Barnett in the main event at Affliction's second pay-per-view,"Affliction: Day of Reckoning", on October 11, 2008, the event was rescheduled and Arlovski would instead be matched up against the last reigning IFL Heavyweight Champion Roy Nelson at "EliteXC: Heat" on October 4, 2008, in Sunrise, Florida in a co-promotion with EliteXC. Arlovski won the fight via KO in the second round and in the process became the only man to ever finish Nelson in his MMA career.

In January 2009, Arlovski faced the last reigning PRIDE and current WAMMA heavyweight champion Fedor Emelianenko at "Affliction: Day of Reckoning". Despite early efforts, Arlovski lost the fight via KO in the opening round.

Most recently in a co-promoted event between Affliction and Strikeforce, Arlovski fought up and coming, heavyweight, Brett Rogers at Strikeforce: Lawler vs. Shields on June 6, 2009. Arlovski lost the fight via TKO in the opening round.