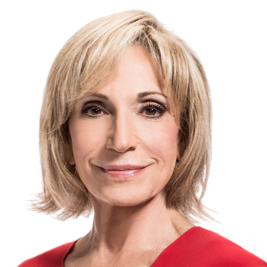 If your goal is to hire Andrea Mitchell to be your next keynote speaker or to be the next brand ambassador our celebrity speakers bureau can assist. If Andrea Mitchell’s booking fee is outside your companies budget or your unable to align with his appearance availability, our booking agents can provide you a list of talent that aligns with your event theme, budget and event date.

In her position as the chief foreign affairs correspondent for NBC News, Andrea Mitchell has become one of America's most trusted broadcast journalists. She has traveled the nation and the globe, covering such topics as the war on terrorism and nuclear proliferation to campaign finance reform and the budget.

Mitchell has also covered a wide range of domestic and political issues from a post that includes various world hot spots, summits, presidential trips, the State Department, and the CIA. She has reported on Medicaid fraud, sex discrimination in the military, and gun control.

Prior to being named chief foreign affairs correspondent in 1994, Mitchell was NBC News' chief white house correspondent, a position she assumed after covering Bill Clinton from the New Hampshire primary through the entire 1992 presidential campaign. During her time at the White House, she broke stories on cabinet changes, policy decisions, gays in the military, and military interventions in Bosnia and Haiti.

From 1988 to 1992, Mitchell served as chief congressional correspondent, playing a major role in reporting on the savings and loan bailout, the Clarence Thomas hearings, and other legislative issues. She also served as a regular political analyst on Today. Over the years, Mitchell has appeared on Meet the Press as a panelist and substitute host. An acclaimed political reporter, she has covered every presidential election since 1976.

According to an annual study of network news correspondents, Mitchell was the most visible woman in network television in 1999, reporting an impressive 98 stories for Nightly News with Tom Brokaw. She was nominated that year for two news Emmy awards for outstanding instant coverage of a news story for her reporting on the crisis in Iraq and for the terrorist Embassy bombings in Kenya and Tanzania.

In September 2005, Mitchell published her first book, Talking Back, a memoir about her experiences as one of the first women to cover five presidents, Congress, and foreign policy. Offering audiences her wealth of experience, Mitchell shares her unique worldview on Washington and international politics.