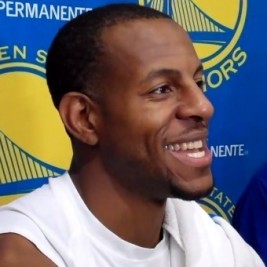 Businesses, Non-profit organizations, event planners and companies across the country have worked closely with our booking agents to hire Andre Iguodala for a speaking engagements, guest appearances, product endorsements and corporate events. Many of those same clients have continued to turn to our speakers bureau as we can easily align Andre Iguodala’s availability with their upcoming seminar, gala, annual conference, corporate function, and grand opening. Our close relationship with Andre Iguodala’s booking agent and management team further enables us to provide inquiring clients with Andre Iguodala’s speaking fee and appearance cost.

If your goal is to hire Andre Iguodala to be your next keynote speaker or to be the next brand ambassador our celebrity speakers bureau can assist. If Andre Iguodala’s booking fee is outside your companies budget or your unable to align with his appearance availability, our booking agents can provide you a list of talent that aligns with your event theme, budget and event date.

Andre Iguodala is an American professional basketball player who currently plays for the Golden State Warriors of the National Basketball Association. The swingman was an NBA All-Star in 2012 and has been named to the NBA All-Defensive Team twice. Iguodala won an NBA championship with the Warriors in 2015, when he was named the NBA Finals Most Valuable Player. He was also a member of the United States national team at the 2010 FIBA World Championship and 2012 Summer Olympics, winning the gold medal both times.

Iguodala went to Lanphier High School in Springfield, Illinois before attending the University of Arizona. After completing two years, he declared for the 2004 NBA draft where he was drafted with the ninth overall pick by the Philadelphia 76ers. Iguodala played in Philadelphia until the summer of 2012, when he was traded to the Denver Nuggets in a four team trade. He was acquired by Golden State in 2013. In 2014–15, he became a reserve for the first time in his career, but captured the Finals MVP after he returned to the starting lineup in the middle of series.