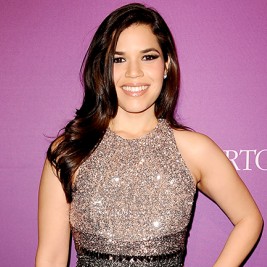 If your goal is to hire America Ferrera to be your next keynote speaker or to be the next brand ambassador our celebrity speakers bureau can assist. If America Ferrera’s booking fee is outside your companies budget or your unable to align with his appearance availability, our booking agents can provide you a list of talent that aligns with your event theme, budget and event date.

America Ferrera is an American actress. She is known for her leading role as Betty Suarez on the ABC comedy-drama series Ugly Betty (2006–2010). Her portrayal garnered critical acclaim, and she won the Golden Globe Award for Best Actress – Television Series Musical or Comedy, the Screen Actors Guild Award for Outstanding Performance by a Female Actor in a Comedy Series, and the Primetime Emmy Award for Outstanding Lead Actress in a Comedy Series.

She has starred in a number of films, including Real Women Have Curves (2002), The Sisterhood of the Traveling Pants (2005), its sequel The Sisterhood of the Traveling Pants 2 (2008), The Dry Land (2010), End of Watch (2012), and Our Family Wedding (2010). She also had a small role in the skateboard biopic Lords of Dogtown (2005). In addition, Ferrera provides the voice of Astrid the Viking in the DreamWorks animated picture How to Train Your Dragon (2010), Cartoon Network's television series based on the film Dragons: Riders of Berk, Dragons: Defenders of Berk and the sequel, How to Train Your Dragon 2 (2014). Ferrera will mark her return to television as a regular and co-producer on the upcoming sitcom Superstore, which was picked up by NBC for the 2015-16 television season.