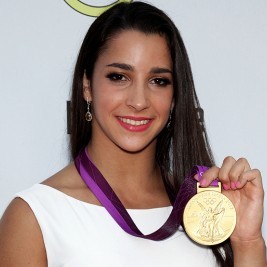 Businesses, Non-profit organizations, event planners and companies across the country have worked closely with our booking agents to hire Aly Raisman for a speaking engagements, guest appearances, product endorsements and corporate events. Many of those same clients have continued to turn to our speakers bureau as we can easily align Aly Raisman’s availability with their upcoming seminar, gala, annual conference, corporate function, and grand opening. Our close relationship with Aly Raisman’s booking agent and management team further enables us to provide inquiring clients with Aly Raisman’s speaking fee and appearance cost.

If your goal is to hire Aly Raisman to be your next keynote speaker or to be the next brand ambassador our celebrity speakers bureau can assist. If Aly Raisman’s booking fee is outside your companies budget or your unable to align with his appearance availability, our booking agents can provide you a list of talent that aligns with your event theme, budget and event date.

Aly Raisman was born May 25, 1994 and is an American artistic gymnast who was captain of the gold medal-winning US Women's Gymnastics team at the 2012 Summer Olympics and individually won a gold medal on the floor and a bronze medal on the balance beam. She was also on the US team that won the 2011 World Championship.

At the end of July, Raisman competed at the 2012 Summer Olympics in London. She helped the American team (nicknamed the "Fierce Five") qualify in first place to the team final, and also qualified in second place for the individual all-around with a score of 60.391. Raisman also qualified fifth to the beam final with a score of 15.100 and first to the floor final with a score of 15.325. After qualifications, Raisman said, "Before we marched out we talked about how we want to have fun here and really enjoy it. We talked about going out and hitting all of our routines just like at 2011 World Championships and that's what we did. I'm really proud of our team."

In the team final, Raisman contributed scores of 14.933 on balance beam and 15.300 on floor toward the American team's first place finish. She said, "We knew we could do it. We just had to pull out all the stops."

In the individual all-around, Raisman finished in fourth place with an overall score of 59.566, which matched the third place score by Russian Aliya Mustafina, but the tie-breaking rules for all-around sum the three highest apparatus scores; with Mustafina scoring 45.933 and Raisman 45.366, Mustafina was awarded the bronze medal. Raisman said, "I'm really happy for Gabby. She's been working really hard so I'm really excited for her, but it's definitely really frustrating because we (Mustafina) tied for third place. I was so close. But being fourth in the world is definitely something to be proud of."

In the balance beam final, Raisman won the bronze medal. She initially scored 14.966, but after U.S. team coordinator Márta Károlyi and husband Béla Károlyi had requested a video review, the judges re-evaluated and granted an extra tenth towards her routine's difficulty. As a result, Raisman scored 15.066, matching Romanian Cătălina Ponor for third place, and in the tie-breaking procedure, which prioritizes execution score, Raisman scored higher. She said, "I felt really good on my beam routine today and I'm happy that it was good enough for bronze. This day has been so crazy and really special. I am really excited to celebrate with my family and friends tonight."

In the floor final, Raisman won the gold medal with a score of 15.600. She said, "It feels amazing. I have been working so hard, so to have it come true is so exciting. I have always dreamed of being the Olympic Champion on floor, so I was really happy to be able to do the floor routine of my life here today." She is the first American woman to win the gold medal on floor. Raisman performed her floor exercise to the tune Hava Nagila.

During the first night of Women's Gymnastics competition in the 2016 Summer Olympics, Raisman and the U.S. women qualified into the team final in first place with a score of 185.238, almost 10 points ahead of the second place qualifying team. Individually, Raisman qualified second to individual all-around with a score of 60.607 behind teammate Simone Biles, and qualified second to the floor exercise final, where she is the defending Olympic Champion from the London Games, with a score of 15.275, again behind teammate Simone Biles. On the second day of competition, Raisman competed on vault, balance beam, and floor exercise in the team final to help secure the gold medal for the U.S. Team and defend the title she earned with the Fierce Five in 2012. At the end of the competition, Raisman and her teammates debuted the team name of the 2016 U.S. Women's Gymnastics Team: "The Final Five," in recognition that this is the last Olympic Team Marta Karolyi would name and because this is the last Olympics where the women would have teams of five competing in team finals, as it was announced recently that in Tokyo 2020, they would compete as teams of four.