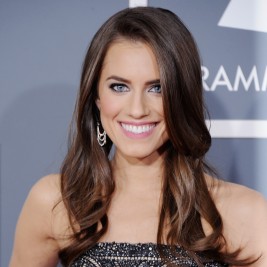 If your goal is to hire Allison Williams to be your next keynote speaker or to be the next brand ambassador our celebrity speakers bureau can assist. If Allison Williams’s booking fee is outside your companies budget or your unable to align with his appearance availability, our booking agents can provide you a list of talent that aligns with your event theme, budget and event date.

Allison Williams is an American actress, comedian, and musician. She is the daughter of Jane Gillan Stoddard and NBC Nightly News anchor Brian Williams. Williams was raised in New Canaan, Connecticut. She attended Yale University and graduated in 2010. While at Yale, Williams was a member of the improv comedy troupe Just Add Water for four years, and was inducted to St. Elmo. In 2010, she performed a mashup of "Nature Boy" set to RJD2's "A Beautiful Mine", the theme song for the television series Mad Men. The YouTube video of the performance received widespread praise on the Internet, and convinced Judd Apatow that she should be given a part in the HBO TV series Girls. She was cast shortly after and credited her experience at Just Add Water for passing the audition. Girls premiered on April 15, 2012. Williams wrote a series of Funny or Die sketches in which she starred as newlywed Kate Middleton. Williams appeared in the third season of The League as Danielle in the episode "The Guest Bong." Williams has appeared as a recurring character, Cheryl, in the CollegeHumor series Jake and Amir.