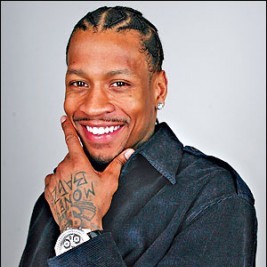 Businesses, Non-profit organizations, event planners and companies across the country have worked closely with our booking agents to hire Allen Iverson for a speaking engagements, guest appearances, product endorsements and corporate events. Many of those same clients have continued to turn to our speakers bureau as we can easily align Allen Iverson’s availability with their upcoming seminar, gala, annual conference, corporate function, and grand opening. Our close relationship with Allen Iverson’s booking agent and management team further enables us to provide inquiring clients with Allen Iverson’s speaking fee and appearance cost.

If your goal is to hire Allen Iverson to be your next keynote speaker or to be the next brand ambassador our celebrity speakers bureau can assist. If Allen Iverson’s booking fee is outside your companies budget or your unable to align with his appearance availability, our booking agents can provide you a list of talent that aligns with your event theme, budget and event date.

Allen Iverson is an American retired professional basketball player who played for four different teams (Philadelphia 76ers, Denver Nuggets, Detroit Pistons, and Memphis Grizzlies) during 14 seasons in the National Basketball Association.  He played both the shooting guard and point guard positions. Iverson was an eleven-time NBA All-Star, won the All-Star game MVP award in 2001 and 2005, and was the NBA's Most Valuable Player in 2001.

Iverson attended Bethel High School in Hampton, Virginia and was a dual-sport athlete. He earned the Associated Press High School Player of the Year award in both football and basketball, and won the Division AAA Virginia state championship in both sports. After high school, Iverson attended Georgetown University for two years, where he set the school record for career scoring average (22.9 points per game) and won Big East Defensive Player of the Year awards both years.

Following two successful years at Georgetown, Iverson declared eligibility for the 1996 NBA draft, and was selected by the Philadelphia 76ers with the first overall pick. He was named the NBA Rookie of the Year in the 1996–97 season. Winning the NBA scoring title during the 1998–99, 2000–01, 2001–02, and 2004–05 seasons, Iverson was one of the most prolific scorers in NBA history, despite his small stature (listed at 6 feet, 0 inches). His regular season career scoring average of 26.7 points per game ranks sixth all-time, and his playoff career scoring average of 29.7 points per game is second only to Michael Jordan. Iverson was also the NBA Most Valuable Player of the 2000–01 season and led his team to the 2001 NBA Finals the same season. Iverson represented the United States at the 2004 Summer Olympics, winning the bronze medal. He also played for the Denver Nuggets, Detroit Pistons and the Memphis Grizzlies, before ending his NBA career with the 76ers during the 2009–10 season.

He was rated the fifth-greatest NBA shooting guard of all time by ESPN in 2008. Iverson officially announced his retirement from professional basketball on October 30, 2013.