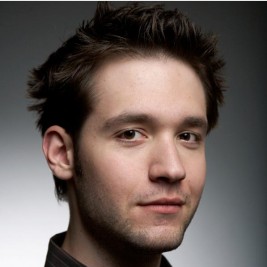 Businesses, Non-profit organizations, event planners and companies across the country have worked closely with our booking agents to hire Alexis Ohanian for a speaking engagements, guest appearances, product endorsements and corporate events. Many of those same clients have continued to turn to our speakers bureau as we can easily align Alexis Ohanian’s availability with their upcoming seminar, gala, annual conference, corporate function, and grand opening. Our close relationship with Alexis Ohanian’s booking agent and management team further enables us to provide inquiring clients with Alexis Ohanian’s speaking fee and appearance cost.

If your goal is to hire Alexis Ohanian to be your next keynote speaker or to be the next brand ambassador our celebrity speakers bureau can assist. If Alexis Ohanian’s booking fee is outside your companies budget or your unable to align with his appearance availability, our booking agents can provide you a list of talent that aligns with your event theme, budget and event date.

Alexis Ohanian was born April 24, 1983 and is an American internet entrepreneur, activist and investor based in the Brooklyn borough of New York City, best known for co-founding the social news website reddit, helping launch travel search website Hipmunk, and starting social enterprise Breadpig. Alexis Ohanian was born to an Armenian-American father and a German-born mother.[2] After graduating from the University of Virginia in 2005, Alexis Ohanian started reddit.com, with co-founder Steve Huffman. Reddit initially received funding from Y Combinator and was later acquired by Condé Nast Publications in 2006. Ohanian continues to work closely with reddit as a member of its Board of Directors. In 2007, Ohanian launched breadpig, an "uncorporation" that produces geeky merchandise and gives the proceeds to charity. He continues to run breadpig today as its Founder and Chief Swine Defender. After leaving reddit in 2009, Ohanian spent 3 months working in microfinance as a Kiva fellow in Yerevan, Armenia. In 2009, Ohanian spoke at TED about a whale named Mister Splashy Pants, Ohanian helped launch travel search website hipmunk in 2010, and now acts as an advisor. In June 2010, Ohanian announced the launch of his company Das Kapital Capital, which focuses on startup investing, advising and consulting. Ohanian was named the "Ambassador to the East" for early stage venture firm Y Combinator. In this position, he meets with East Coast applicants, mentors New York YC founders, and is a general representative for the company. In late 2010 and early 2011, Ohanian spoke out against Congress's Stop Online Piracy Act and the Senate's Protect IP Act. He helped lead the Internet-enabled grassroots campaign that eventually overturned the two bills. Ohanian spoke to members of Congress, helped launch the national anti-SOPA/PIPA protests that took place on January 18, 2012, and spoke at the rally in New York that was organized by NY Tech Meetup. In October 2012, Ohanian teamed up with reddit General Manager Erik Martin and embarked on the Internet 2012 Bus Tour from Denver, CO to Danville, KY to campaign for the open Internet during the Presidential and Vice Presidential debates. One of the campaign stops spurred the idea for a possible "National Geek Day." in Washington DC. In response to his work advocating for the Open Internet, The Daily Dot named Ohanian number one in their top ten most influential activists of 2012, and Forbes dubbed him "Mayor of the Internet." On December 10, 2012, Alexis Ohanian teamed up with Lester Chambers of The Chambers Brothers to launch a Kickstarter project, with the intent to make a new album titled "Lester's Time Has Come." According to Fast Company, Ohanian aimed "to prove that there are new, sustainable funding opportunities for artists now thanks to platforms like Kickstarter."