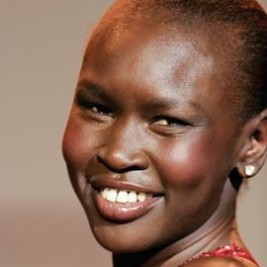 Businesses, Non-profit organizations, event planners and companies across the country have worked closely with our booking agents to hire Alek Wek for a speaking engagements, guest appearances, product endorsements and corporate events. Many of those same clients have continued to turn to our speakers bureau as we can easily align Alek Wek’s availability with their upcoming seminar, gala, annual conference, corporate function, and grand opening. Our close relationship with Alek Wek’s booking agent and management team further enables us to provide inquiring clients with Alek Wek’s speaking fee and appearance cost.

If your goal is to hire Alek Wek to be your next keynote speaker or to be the next brand ambassador our celebrity speakers bureau can assist. If Alek Wek’s booking fee is outside your companies budget or your unable to align with his appearance availability, our booking agents can provide you a list of talent that aligns with your event theme, budget and event date.

When Elle chose Alek Wek for the cover of their November 1997 issue, they were taking what many magazines considered a risk: a dark-skinned African girl on your cover did not, theoretically, sell issues. The result, however, was monumental reader response with letters-to-the-editor from women and men ecstatic about seeing the standards of beauty in fashion redefined. As Oprah commented when Alek appeared on her show, “If you’d been on the cover of a magazine when I was growing up, I would have had a different concept of who I was.”

Born in Southern Sudan, Alek was raised as a part of the Dinka tribe. At fourteen, the civil war forced her to flee to London with her younger sister, where they were later joined by their mother and siblings. It was in London, at a street fair, where Alek was discovered. She launched a career in modeling that has since named her: “Model of the Decade” by trendsetting i-D magazine; one of People magazine’s “50 Most Beautiful People” in May of 1999 as well as one of the “50 Most Influential Faces in Fashion” according to i-D and Frank magazines.

Alek’s influence extends far beyond the fashion world and societal concepts of beauty. She spoke at the International Black Caucus Foreign Affairs as a member of a panel, which included Hillary Clinton, Congressman Daniel Payne, Danny Glover and many other distinguished speakers. Alek has also served on the advisory board for the U.S. Committee for Refugees. She speaks in New York area schools to bring attention to the famine in Southern Sudan and to educate children on the importance of nourishment, in addition to helping to launch the Bracelet of Life campaign in conjunction with Medicins Sans Frontiers/Doctors Without Borders. She has also worked closely on behalf of AIDS Awareness, children’s charities and breast cancer research.

Alek has been dedicating her free time to one of her other passions: design. She has combined what she has learned from her years in the industry with her natural artistic ability to create a line that is a true reflection of her. Judging by the enormous success of her special line of handbags (Wek 1933), Alek is poised to become a force to be reckoned with on both sides of the fashion business. In addition, she is also pursuing an acting career.

Alek is also the author of her successful memoir, Alek: From Sudanese Refugee to International Supermodel, which was released in September 2007. In the book, Wek takes readers back to her native home of Wau, in southern Sudan, where she knew only a few years of peace with her family before they were caught up in a ruthless civil war that pitted outlaw militias, the Muslim-dominated government and southern rebels against each other in a brutal conflict that killed nearly 2 million people. She recounts her daring story of fleeing the war on foot, her escape to London (where her life took an unexpected turn) and her rise to international supermodel in the glamorous, elite world of fashion.

In her presentations, Alek shares her perspective and experiences of being a refugee as well as an inside look into the life of a most unique supermodel. Her story is one that is sure to inspire and inform.