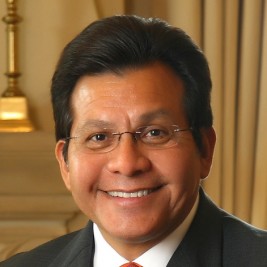 If your goal is to hire Alberto Gonzales to be your next keynote speaker or to be the next brand ambassador our celebrity speakers bureau can assist. If Alberto Gonzales’s booking fee is outside your companies budget or your unable to align with his appearance availability, our booking agents can provide you a list of talent that aligns with your event theme, budget and event date.

Alberto R. Gonzales is an American lawyer who served as the 80th United States Attorney General, appointed in February 2005 by President George W. Bush, becoming the highest-ranking Hispanic American in executive government to date. He was the first Hispanic to serve as White House Counsel. Earlier he had been Bush's General Counsel during his governorship of Texas. Gonzales had also served as Secretary of State of Texas and then as a Texas Supreme Court Justice.

Gonzales's tenure as U.S. Attorney General was marked by controversy regarding warrantless surveillance of U.S. citizens and the legal authorization of so-called "enhanced interrogation techniques", later generally acknowledged as constituting torture, in the U.S. government's post-9/11 "War on Terror". Gonzales had also presided over the firings of several U.S. Attorneys who had refused back-channel White House directives to prosecute political enemies, allegedly causing the office of Attorney General to become improperly politicized. Following calls for his removal, Gonzales resigned from the office "in the best interests of the department," on August 27, 2007, effective September 17, 2007.

In 2008, Gonzales began a mediation and consulting practice. Additionally, he taught a political science course and served as a diversity recruiter at Texas Tech University. Gonzales is currently the Dean of Belmont University College of Law, in Nashville, Tennessee, where he currently teaches Constitutional Law, Separation of Powers, National Security Law and First Amendment Law. He is also counsel at a Nashville-based law firm, Waller Lansden Dortch & Davis, where he advises clients on special matters, government investigations and regulatory matters. He often writes opinion pieces for national newspapers and appears on national news programs. He was ranked one of "Newsmax's 50 Most Influential Latino Republicans" in 2016.