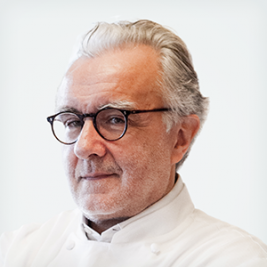 Businesses, Non-profit organizations, event planners and companies across the country have worked closely with our booking agents to hire Alain Ducasse for a speaking engagements, guest appearances, product endorsements and corporate events. Many of those same clients have continued to turn to our speakers bureau as we can easily align Alain Ducasse’s availability with their upcoming seminar, gala, annual conference, corporate function, and grand opening. Our close relationship with Alain Ducasse’s booking agent and management team further enables us to provide inquiring clients with Alain Ducasse’s speaking fee and appearance cost.

If your goal is to hire Alain Ducasse to be your next keynote speaker or to be the next brand ambassador our celebrity speakers bureau can assist. If Alain Ducasse’s booking fee is outside your companies budget or your unable to align with his appearance availability, our booking agents can provide you a list of talent that aligns with your event theme, budget and event date.

Alain Ducasse was born September 13, 1956 and is a Monégasque chef. He formerly held French nationality. He operates a number of restaurants including Alain Ducasse at The Dorchester which holds three stars (the top ranking) in the Michelin Guide. In 1986, Ducasse was offered the Chef position at the Hotel de Paris in Monte Carlo, with management including the hotel's Le Louis XV. After assuring himself that the Hotel's other restaurant operations were operating well, Ducasse continued to run management. In 1988, Ducasse expanded beyond the restaurant industry and opened La Bastide de Moustiers, a twelve-bedroom country inn in Provence and he began attaining financial interests in other Provence hotels. On 12 August 1996, the Alain Ducasse restaurant opened in Le Parc – Sofitel Demeure Hôtels in the 16th arrondissement of Paris. The Red Guide awarded the restaurant three stars just eight months after opening. Ducasse came to the United States and in June 2000 opened the Alain Ducasse restaurant in New York City's Essex House hotel at 160 Central Park South, receiving the Red Guide's three stars in December 2005, in the first Red Guide for NYC. That restaurant closed in 2007 when Ducasse chose to open a restaurant in Las Vegas named Mix, which later went on to earn one star in the Michelin Red Guide. In early 2008, Ducasse opened Adour, at the St. Regis Hotel on 16th and K Street in Washington, DC, and has also opened a more casual Bistro Benoit New York, at 60 West 55th Street. Ducasse became the first chef to own restaurants carrying three Michelin Stars in three cities. The New York restaurant was dropped from the 2007 Michelin Guide because the restaurant was scheduled to close. Ducasse has become known through his writing and influences. Ducasse is also the only chef to hold 19 Michelin stars throughout his career (Masterchef 2010).