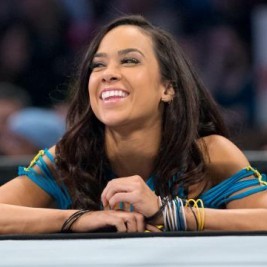 Businesses, Non-profit organizations, event planners and companies across the country have worked closely with our booking agents to hire AJ Lee for a speaking engagements, guest appearances, product endorsements and corporate events. Many of those same clients have continued to turn to our speakers bureau as we can easily align AJ Lee’s availability with their upcoming seminar, gala, annual conference, corporate function, and grand opening. Our close relationship with AJ Lee’s booking agent and management team further enables us to provide inquiring clients with AJ Lee’s speaking fee and appearance cost.

If your goal is to hire AJ Lee to be your next keynote speaker or to be the next brand ambassador our celebrity speakers bureau can assist. If AJ Lee’s booking fee is outside your companies budget or your unable to align with his appearance availability, our booking agents can provide you a list of talent that aligns with your event theme, budget and event date.

Is AJ Lee the figment of some Manga-geek’s adolescent imagination? She’s an avid video gamer, regularly thumbs through comic books and wears the scuffs on her Chuck Taylors with pride. But don’t be fooled. This unpredictable young woman is not as innocent as she looks. Although she stands a petite, 5-foot-2, AJ is a fierce competitor with an energetic, high-flying style that poses a threat to any Diva.

This bold New Jersey native first introduced herself to the WWE Universe on the third season of WWE NXT. She finished in third place, but won many WWE fans with her lucha-inspired moveset and indomitable fighting spirit. A year after debuting on SmackDown in May 2011, AJ was pivotal in the 18-second outcome of the World Heavyweight Championship Match at WrestleMania XXVIII with a kiss to her beau, Daniel Bryan. The couple’s subsequent breakup sent AJ into an emotional tailspin, and went on to become romantically entangled with WWE’s top Superstars, including CM Punk, Kane and even John Cena.

Following a brief and controversial stint as Raw’s General Manager — a tenure marred by controversy due to her increasingly erratic behavior — AJ found herself in the arms of the brash Dolph Ziggler. Coincidentally enough, it was in the femme fatale’s home state that The Showoff “cashed in” his Money in the Bank contract on Alberto Del Rio to become the World Heavyweight Champion just one night after WrestleMania 29. It wasn’t long before AJ claimed a championship of her own.

After winning a No. 1 Contender’s Divas Battle Royal on Raw, the calculating manipulator pretended to be Kaitlyn’s “secret admirer” for weeks — a mind game that culminated on Raw just six days before their title clash at WWE Payback. AJ beat her former friend for the Divas Championship with her punishing Black Widow submission maneuver, but she didn’t just take “The Hybrid Diva’s” title — she destroyed her emotionally. It was a disturbing reminder that there is nothing more dangerous than a woman scorned.

Not merely satisfied with vanquishing her rival, the twisted titleholder continued playing mind games. At Money in the Bank, Kaitlyn looked as though she had AJ on the ropes, but the champion locked in the Black Widow and force her estranged friend to tap out, retaining her Divas Championship. AJ’s night was soon soured, however, as she interfered in Ziggler’s World Heavyweight Championship Match and attacked Alberto Del Rio, drawing a disqualification that killed Dolph’s chances of grabbing the title. After Ziggler made it clear that he was done with AJ the following night, the ferocious femme fatale retaliated by slapping Ziggler across the face and beamed when Big E Langston left him laying in the middle of the ring.

Though split from The Showoff, AJ still finds herself in formidable company, including the cunning Layla and the hulking Big E Langston, who teamed with the fiery Diva against Ziggler & Kaitlyn in a Mixed Tag Team Match at SummerSlam. Although the duo came up short in Los Angeles, AJ’s ego remains unchallenged in WWE. On the Aug. 26 edition of Raw, the brash titleholder confronted the cast of “Total Divas” and proclaimed in no uncertain terms that none of the women on the hit reality show are qualified to share the ring with AJ Lee. After interfering in a No. 1 Contender’s Triple Threat Match on the Sept. 2 edition of Raw that was to determine her next challenger, AJ now finds herself defending the Divas Championship against “Total Divas” Natalya, Naomi and Brie Bella in a Fatal 4-Way Match at Night of Champions. Now that AJ has rallied Layla, Alicia Fox and Aksana against her “Total Divas” foes, has AJ gained the necessary leverage to successfully defend her title on Sept. 15? No matter what happens next, one thing is clear: AJ Lee will always keep us guessing.