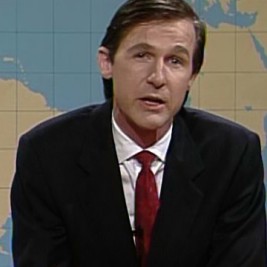 Travel Location
Available Upon Request
Book A. Whitney Brown For

Book A. Whitney Brown for a Speaking Engagement

If your goal is to hire A. Whitney Brown to be your next keynote speaker or to be the next brand ambassador our celebrity speakers bureau can assist. If A. Whitney Brown’s booking fee is outside your companies budget or your unable to align with his appearance availability, our booking agents can provide you a list of talent that aligns with your event theme, budget and event date.

Alan Whitney Brown is an Emmy Award-winning (1988 Outstanding Writing in a Variety or Music Program, along with others including Al Franken, Tom Davis, Phil Hartman, Mike Myers, Lorne Michaels, Conan OBrien) writer and comedian probably best known for his recurring appearances on Saturday Night Live in the 1980s opposite Dennis Miller in a biting satirical Weekend Update commentary segment called The Big Picture. Also, he was one of the original correspondents on Comedy Centrals The Daily Show from 1996 to 1998.

Born in Charlotte, Michigan, Brown began his career as a street juggler, and became a stand-up comedian after entering the 1975 San Francisco Comedy Competition. He became a member of the Writers Guild when he was hired by Lorne Michaels to join the writing staff of Saturday Night Live in 1985; he was also a featured performer. He left for personal reasons six years later. He worked briefly for the liberal radio network Air America Radio during its start-up period in early 2004 and remains active in online political discourse.

Read More About A. Whitney Brown

NOPACTalent acts as a Celebrity Speakers Bureau and Athlete Booking agency for corporate functions, appearances, private events and speaking engagements. NOPACTalent does not claim or represent itself as A. Whitney Brown’s speakers bureau, agent, manager or management company for A. Whitney Brown or any celebrity on this website. NOPACTalent represents organizations seeking to hire motivational speakers, athletes, celebrities and entertainers for private corporate events, celebrity endorsements, personal appearances, and speaking engagements.